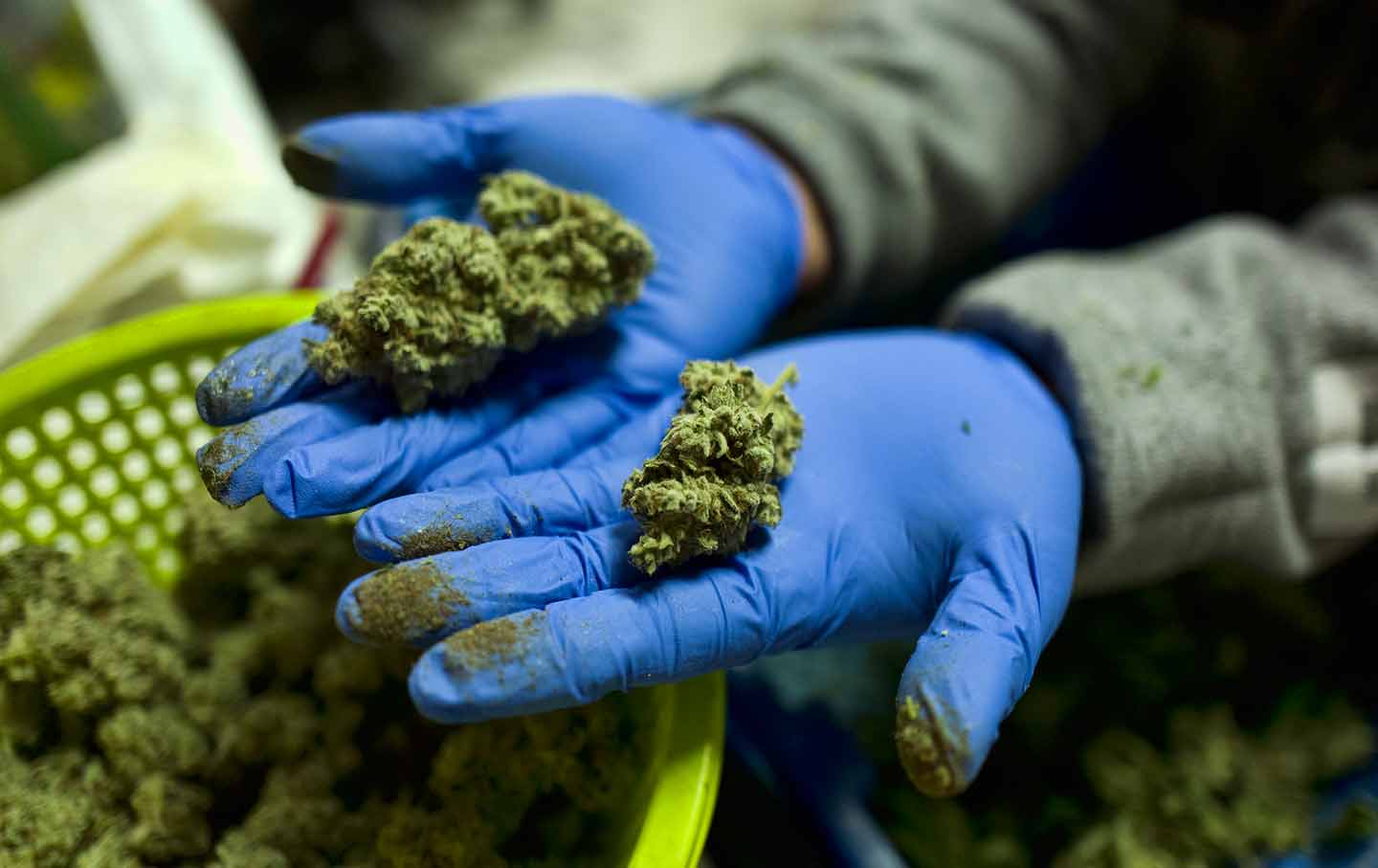 The Nation is reader supported: Chip in $10 or more to help us continue to write about the issues that matter.

The Nation is reader supported: Chip in $10 or more to help us continue to write about the issues that matter.

Did you know you can support The Nation by drinking wine?

Early this December, the Democratic-controlled House of Representatives passed a bill to decriminalize marijuana at the federal level. The Marijuana Opportunity Reinvestment and Expungement (MORE) Act would expunge low-level cannabis convictions, remove pot from the Controlled Substances Act, and impose a 5 percent tax on legal marijuana sales, directing some of that revenue into grants that help those the bill identifies as “adversely impacted” by racist drug prohibition laws take advantage of the legal pot marketplace. The Congressional Budget Office estimates that from 2021 to 2030, the law “would reduce time served by 73,000 person-years, among existing and future” federal inmates. It’s one significant (though imperfect) step toward undoing the “legacy of racial and ethnic injustices…of 80 years of cannabis prohibition enforcement,” according to the bill’s sponsors.

And yet the legislation was met with mockery and derision by congressional Republicans, who registered their opposition through statements dripping with disingenuous concern-trolling, unscientific fearmongering, and insincere indignation. “The House of Representatives is spending this week on pressing issues like marijuana. You know, serious and important legislation befitting this national crisis,” snarked Senate majority leader Mitch McConnell, who since April has obstructed every effort to produce a coronavirus relief package. Perhaps indifferent to the fact that some 40,000 people remain incarcerated in the United States on pot-related offenses, per the Last Prisoner Project, Representative Pete Stauber of Minnesota waved off the legislation as unimportant to those who really count. “Americans deserve better,” he tweeted.

“The arguments we heard throughout the floor debate on the MORE Act, to me, were just really out of touch and offensive,” said Maritza Perez, director of the Office of National Affairs at the Drug Policy Alliance. “We know that half a million people are arrested every year for simple marijuana possession. Black and brown Americans have long deserved an end to the War on Drugs, and the MORE Act is one small step toward undoing the incalculable damage that war has wrought. A criminal conviction can disallow someone from getting housing, from earning a higher education, from getting a job. These are all things that are especially important during a pandemic, when people are feeling the economic crunch.”

From their inception, drug prohibition laws have targeted Black and brown folks with laser precision. Harry Anslinger, appointed as the first director of the Federal Bureau of Narcotics in 1930, publicly declared that “reefer makes darkies think they’re as good as white men.” Instead of using the standard term “cannabis,” Anslinger leaned into the Mexican word “marihuana,” exploiting the xenophobia that followed immigrant flows from the southern border after the Mexican Civil War. “There are 100,000 total marijuana smokers in the US, and most are Negroes, Hispanics, Filipinos, and entertainers,” Anslinger warned the white citizens of America. “Their Satanic music, jazz and swing, results from marijuana use. This marijuana causes white women to seek sexual relations with Negroes, entertainers, and others.”

In 1937, Anslinger took his case before Congress, where he testified about the need for a law that would criminalize the use, possession, and sale of cannabis. Included in his evidence was an article reporting that Mexican immigrants in Colorado were producing weed “cigarettes which they sell at two for 25 cents, mostly to white school students.” Anslinger succeeded in convincing Congress to pass the Marihuana Tax Act of 1937, which effectively made pot illegal at the federal level. The Boggs Act and the Narcotic Control Act followed in the 1950s, setting mandatory minimums for sentencing and establishing increasingly greater penalties for weed crimes.

“The Nixon campaign in 1968, and the Nixon White House after that, had two enemies: the antiwar left and black people,” President Richard Nixon’s domestic affairs adviser, John Ehrlichman, admitted to reporter Dan Baum in 1994, nearly 25 years after the administration launched the War on Drugs. “We knew we couldn’t make it illegal to be either against the war or black, but by getting the public to associate the hippies with marijuana and blacks with heroin, and then criminalizing both heavily, we could disrupt those communities…. Did we know we were lying about the drugs? Of course we did.” In the following decades, Presidents Ronald Reagan and Bill Clinton further criminalized cannabis use.

Finally, though, the tide is turning. As of the November elections, 36 states and the District of Columbia have made medical marijuana legal, while 15 states have signed off on recreational pot use. But Black folks continue to be disproportionately affected by the racially unequal application of marijuana laws. An ACLU study found that, despite the fact that Black and white people use pot at the same rate, Black folks are nearly four times as likely to be arrested. And people with felony convictions are disqualified from owning a marijuana dispensary in many states. That means Black folks—who as of 2017 represented only 4.3 percent of top-level stakeholders in the legal marijuana industry—are locked out of the gold rush. “Historically, with alcohol during Prohibition and marijuana now, everything that Black people have gone to prison for, white people seem to be able to get rich from,” DeAnna Hoskins, president of JustLeadership-​USA, told me.

The MORE Act doesn’t adequately address this issue, Hoskins added. The bill would prohibit those with marijuana felonies from working in the legal pot marketplace. It also restricts expungement and resentencing relief to “nonviolent” marijuana offenders, even though many “violent” crimes don’t actually involve the use of violence, and Black offenders are far more likely to have been charged with them than white ones.

Yet even this modest bill has a snowball’s chance in hell of clearing the Senate. “Part of the political process is moving the needle,” Perez said. “We were under no illusion that Mitch McConnell would bring this to the floor. But once you go forward, it’s really hard to go back. We got the bill through a chamber of Congress. We made history.”

“The federal government, law enforcement, the criminal justice system—it’s the only business I know that continues to dig a ditch into what’s not working, because it’s a tool to keep Black and brown people marginalized and oppressed,” Hoskins told me. “Is this a system of accountability or a system of punishment—but only for a certain segment of the population? Because for some reason, there’s a refusal to put political capital on the table and to undo this harm, not piecemeal but boldly.”