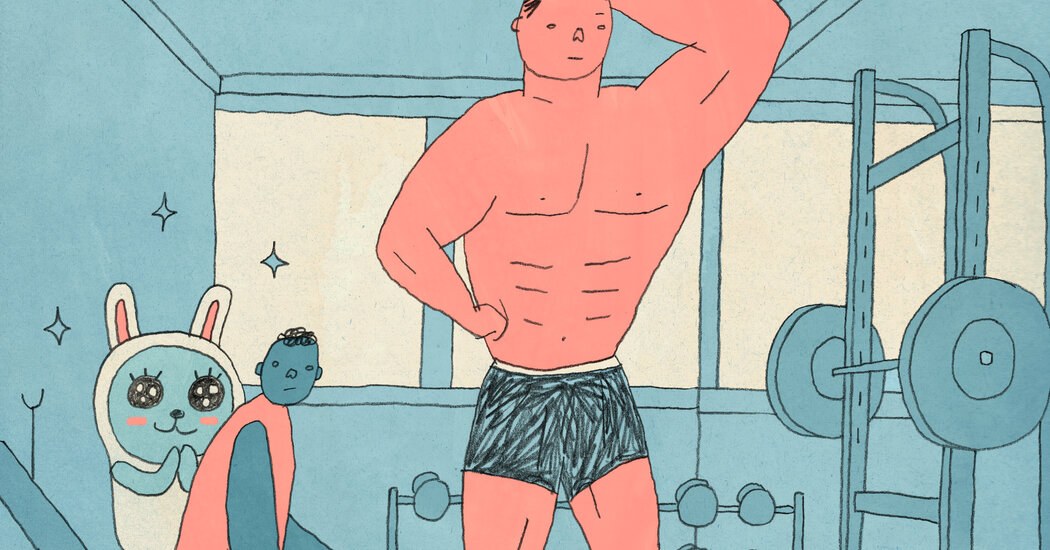 It took two hours and three buses to reach his gym. I was working a split shift at an English language academy in Seoul, leaving me a gap of five hours for taking a nap or traveling to his gym, where, given the long commute, I would barely have enough time to break a sweat.

I did it anyway.

I had discovered Tae Ho on Instagram during my first year of teaching in South Korea; I guess I liked too many pictures of Korean bodybuilders, and the social media universe was giving me a nudge. I never liked any of Tae Ho’s photos though, fearful that I would be blocked for my blatant thirstiness. I just scrolled, sifting for clues about his life, where he ate, who he was dating.

It didn’t take long for me to discover that he wasn’t dating anyone, wasn’t single and wasn’t gay either; he was married to a woman. I felt a twinge of disappointment upon learning this, but I had no realistic notions about him anyway — or really about any relationship while overseas. Being a tattooed, gay, Black American in Korea didn’t afford many romantic opportunities.

Squinting at one picture of Tae Ho, I was able to make out the name of the gym he frequented in a town on the outskirts of Seoul on the T-shirt of an unsuspecting patron.

[Sign up for Love Letter, our weekly email about Modern Love, weddings and relationships.]

Back then I was teaching in a seaside town many hours away, content in my routines and anonymity. I didn’t feel lonely, but I was beginning to feel anxious about my life there, where I was both highly visible and highly isolated.

I needed a change before I became one of the grizzled expats who stayed beyond his expiration date, whining about how he couldn’t get anyone to have sex with him. With my current contract coming to an end, I applied for the first job I found that was closer to Tae Ho’s gym (but still two hours away).

There are some odd consequences of being Black in Korea. At the gym, the staff would practice slang expressions on me that they’d heard in rap songs, and I would smile and respond using proper grammar like the professional teacher I was. These pernicious stereotypes, provided by a hefty diet of American media, trailed me in my daily life.

One lovely day as I was bantering with a few trainers, Tae Ho sauntered by, joining our discussion on how the abs of one of the other trainers were really coming through. Tae Ho lifted his shirt, showcasing cobblestones of skin and muscle, and I passed on the opportunity to touch them, afraid of a fainting spell.

My default aloofness didn’t translate well in Korea, so I created a new persona, one who would ask random people if they needed an English tutor. To my surprise, Tae Ho took the bait.

KakaoTalk (a messaging platform similar to WhatsApp) became our new means of communicating. In terms of intimacy, it was a step up from DM-ing on Instagram. We were to begin our first lesson in a few days, meeting at his gym, but the night before he sent me a message that his father had died, so he would have to cancel.

My own father had died the year before. I knew the messy sadness of a son losing his father, and I offered my condolences, yet inside I was shaking. What if this was the end? What if, in his grief, he would find English lessons ridiculous?

Three weeks later, though, he messaged me: “Sir, I am ready for my lesson. Can we meet this Saturday?”

I was overjoyed but took my time in responding. “Sure! I will see you at 12 p.m.”

Two transfers and two hours later, I found him at the gym and asked what he wanted from these lessons, interspersing my English with Korean so he could respond accurately. As he talked, I glanced at his arms, his hands, amazed that this was happening. The gym had televisions showing Tae Ho’s recent win at a muscle competition, him beaming with his shiny biceps and teardrop quads.

At the next class, Tae Ho introduced me to his wife, who was lovely and dressed appropriately, not teetering on high heels and short skirts in the dead of winter as so many did. That made me admire Tae Ho even more. He had a discerning eye.

They were going on vacation to the Philippines and wanted to practice travel expression, so I prepared a packet of common sayings with their pronunciations and Korean equivalents. Perhaps my showiness could result in an invite to his home, the highest honor bestowed upon a foreigner.

My one-sided romance with Tae Ho, neither reciprocated nor noticed, matched my relationship with South Korea. I started out enthralled with the country, even when living in the workaday city of Pohang. When I learned how to read Hangul, the Korean alphabet, and could understand signs and ingredients, my heart sang. When I had my first taste of sogogi bibimbap (a popular beef dish) and japchae (thin noodles), I nearly wept with pleasure.

Yet with knowledge comes clarity. Rose-colored glasses never left my face for the first year, but bit by bit, glare by glare, I was made to remember who I was. On the subway, seats next to me would remain empty. In normally cramped cafes, I would have an entire table to myself. And when applying for jobs, recruiters would inform me that parents didn’t want their child to have a Black teacher.

Cracks also began to appear in my dealings with Tae Ho. He was often tired and didn’t seem as dedicated to his English education. He was opening his own gym and perhaps had concluded that English wasn’t necessary. He canceled more frequently with real reasons but little notice. My texts would go unanswered until, after I swore I would focus on other clients, he would send an emoji letting me know he was thinking of me.

Can it be emotional abuse when only one person is emotionally invested?

Things began to stabilize in the spring and Tae Ho and I, along with his wife, started hanging out more, getting food or a coffee at Starbucks. I normally hate being a third wheel, but observing their interactions made me want to do better.

Our time together began to resemble my old life in New York, where I could complain with the full support of my friends. My new life in Korea was wearing thin, and I was becoming more critical of the gender, sexual and racial disparities. Tae Ho and his wife nodded their heads and offered their own views on the messy side of Korean life, not touched on by K-pop or K-dramas or K-beauty.

We met every week for a few hours, the English lessons dissolving into chatter about marriage and societal expectations. I felt bad for breaking into Korean; he was paying me good money for English conversation. Yet the melding of languages created a new sense of intimacy, and he shared with me how much he loved his wife. His YouTube videos, to which I had begun adding English subtitles (for free, of course), broadcast to the world the Tae Ho that I actually knew. He was happy. And I was becoming something close to happy.

“I know. Korea is tough, hyeong,” he said, using the Korean term for brother (as male friends would refer to each other). “But you have a good job and friends. You help people.”

It was his use of “hyeong” that constricted my throat and dampened my eyes. This word, thrown around harmlessly millions of times a day, felt like a first kiss. No, not a kiss, because it didn’t feel romantic. It felt legitimizing.

My early physical attraction to Tae Ho, based on nothing more than social media posts, had waned, replaced by a platonic intimacy that was real and compelling.

My dream of having a physically perfect specimen fall in love with me seems silly and adolescent now. I was in my mid-30s then and should have known better. I often railed to anyone who would listen about the dangers of trusting social media constructs.

Although I am no longer in Korea, I still follow Tae Ho on Instagram. On occasion, he and I banter using KakaoTalk emoticons, which seem to provide every feeling known to man. I have not found one, however, that captures the special appreciation I feel for him.

Jared Wood, an English teacher in Baltimore, is working on a novel about his time in South Korea.

Modern Love can be reached at [email protected]

Want more from Modern Love? Watch the TV series; sign up for the newsletter; or listen to the podcast on iTunes, Spotify or Google Play. We also have swag at the NYT Store and a book, “Modern Love: True Stories of Love, Loss, and Redemption.”