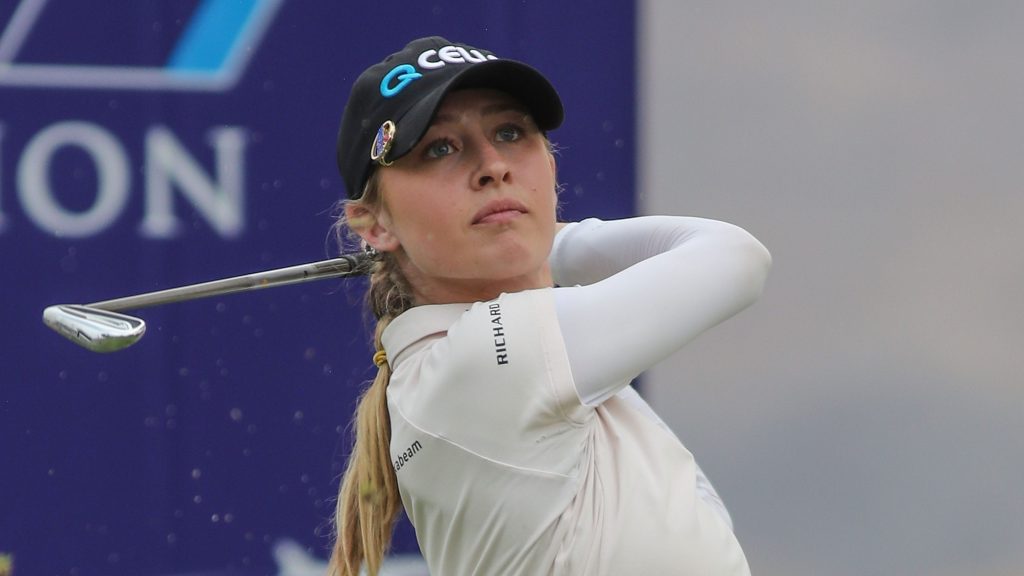 RANCHO MIRAGE, California — After a relatively cool desert morning that seemed perfect for low scoring, a few players in the afternoon did something no one expected.

Nelly Korda birdied her final hole of the day under relatively cool but smoky skies Thursday to shoot a 6-under 66. Korda grabbed a one-shot lead after the first round of the ANA Inspiration on a day that saw high temperatures stay below 100 degrees.

In Gee Chun and Madelene Sagstrom each shot 5-under 67 in the afternoon to ease past a group of players who seemed to take advantage of the morning tee times. That group included Danielle Kang, Brooke Henderson, Kelly Tam, Yu Liu and Nanna Koertstz Maden who all carded 68s. Maden was the only one of that group to play in the afternoon.

The three players at the top of the leader board will all have morning tee times Friday, meaning they might miss the afternoon heat they played in Thursday.

“I actually heard it was a little chilly in the morning today, so I don’t know what to expect (Friday). But it was definitely hot at the start of my round, then toward the end of it we got a little bit of cloud coverage, so that was really nice,” Korda said. “And just drinking lots of water and staying really patient out there is key.”

The leaders in the tournament that was delayed five months because of the coronavirus pandemic are being chased by a powerful group of contenders, with eight players at 69, including two-time ANA Inspiration winner Brittany Lincicome and 2016 winner Lydia Ko.

The second round of the four-day major championship is Friday, with tee times beginning at 7:15 a.m.

For Korda, the four-foot birdie on the 18th hole was her seventh birdie of the day against a single bogey. She birdied both the par-5s on the back nine, the 18th and the 11th after a long bunker shot to just inches from the cup.

“I love tap-in birdies,” Korda said with a smile.

Sagstrom, who won her first tournament on the LPGA earlier this year, was delighted with the golf course, even the change in grasses from typical April dates for the tournament.

“I’m very excited. It was a lot of fun out there. It’s definitely tougher, I would say, than some previous years,” Sagstrom said. “But it also fits my game very well. It’s changed to Bermuda. I love that. I’ve been playing in Florida for a while so I can really read the greens well, and that’s kind of where I’ve been taking advantage today.”

Chun actually reached 6-under par with a birdie on the 16th hole, but bogeyed the 17th and then struggled but made par on the 18th.

“I made a great second shot from 16, and it was a great up-and-down from No. 18,” said Chun, a two-time major champion who admits she has tried to be too perfect in her game as she has tumbled outside of the top 50 in the world. But Chun has two top-10 finishes since the tour restarted in July.

In the morning wave of tee times, it was not the temperature that was the hottest element of the tournament. Instead,it was Kang who continued to sizzle. A two-time winner on the women’s tour since it restarted from a five-month COVID-19 shutdown, Kang navigated the heat, the Bermuda grass and deep rough on the Dinah Shore Tournament Course at Mission Hills for a 4-under 68.

“It’s just been consistently hot every day, but it’s been pretty bearable so far,” Kang said. “I’m from Vegas, it’s 120 out there, so I kind of like the heat. But besides that, I think it’s a major championship. Every day there’s new difficulties. Even the simplest shot is not as simple as we think. So I’ve just got to stay focused, and I think that’s my main goal.”

Kang was just 1-under par for the day after a bogey on the first hole, her 10th hole of the day. But she birdied three of the last eight holes, including a six-footer on the par-5 ninth hole, to reach 4 under. The round could have been better, Kang said, since she made seven birdies on the day. But Kang also had three three-putt bogeys, though she said the three-putts were a technical issue rather than issues with the Bermuda grass on the greens.

“I three-putted three times. I three-putted on 14, 16 and 10. That’s three three-putts in six holes,” Kang said. “It just bugged me a little bit. But there’s always a reason why I’m three-putting. There’s always a reason why I missed a two-and-a-half-footer. Actually the miss on 10 kind of made me realize why did I miss a two-and-a-half-footer, and then I started thinking about it and then I rolled the ball better coming down the stretch.”

Heat a concern for Friday

Henderson, who was celebrating her 23rd birthday Thursday, has been popular among snowbirds in the desert for years. She was another player to make a late move to the top of the leader board among the morning starters.

“I made a lot of pars on the front nine. Solid start, and I felt like I was really close to making a lot of birdies, so I was happy when they started to fall a little bit more on the back nine,” Henderson said. “I’m happy with 4 under, it’s definitely a solid start, nice way to spend your birthday, and hopefully I can just keep making some birdies and climb the leader board.”

Tan, the first player from Malaysia to hold a share of the lead in the ANA Inspiration, followed the time-honored desert adage of playing early in the summer by shooting her 68 from the first tee time of the day.

“It’s definitely nice to play off at 7:15, but the temperature didn’t like drop too fast, so you kind of get a taste of (the heat),” Tan said. “My caddie just kept reminding me that I have to drink water and stuff like that. As the round gets on, you just kind of play and you get a taste of, oh, that flew a little further or that didn’t quite fly as far. I think we judged that really well today, and hopefully we’ll do that (Friday).”

The heat was never truly a problem for anyone Thursday, though the players understand that the temperatures are expected to rise in the coming days.

“Definitely very hot (on Friday) and very different from today. It was kind of nice in the morning, things were a little bit softer, it was a little bit cooler,” Henderson said. “Felt like it was definitely scoring conditions.”

Larry Bohannan is The Desert Sun golf writer, a part of the USA Today Network. He can be reached at (760) 778-4633 or [email protected] Follow him on Facebook or on Twitter at [email protected]_Bohannan.