YPSILANTI, MI – Every automaker can learn something from Volvo’s latest and greatest creation – the all-electric, 5-passenger fastback Polestar 2, which will start arriving at customer homes in the U.S. in late September.

Whether the Polestar 2 will do what no other battery-electric vehicle has yet been able to accomplish (become a serious threat to Tesla) remains to be seen, but a few hours behind the wheel in this southern Michigan college town suggests this car is as well positioned as anything on the road to challenge Elon Musk.

The Polestar 2 has style and grace inside and out. It will run for well over 200 miles (322 km) fully charged. The 408-hp drivetrain will frequently snap your head back against those slick Swedish head restraints with 487 lb.-ft. (660 Nm) of torque. A motor at the front and one at the rear provide standard all-wheel drive, electronic torque vectoring and excellent handling. There are three modes for regenerative braking sensitivity that allow for one- or two-pedal driving.

And it delivers excellent connectivity and infotainment as the first production vehicle to use the Android automotive operating system (pictured below) with the Google Play Store built in; maps and voice recognition also run by Google. 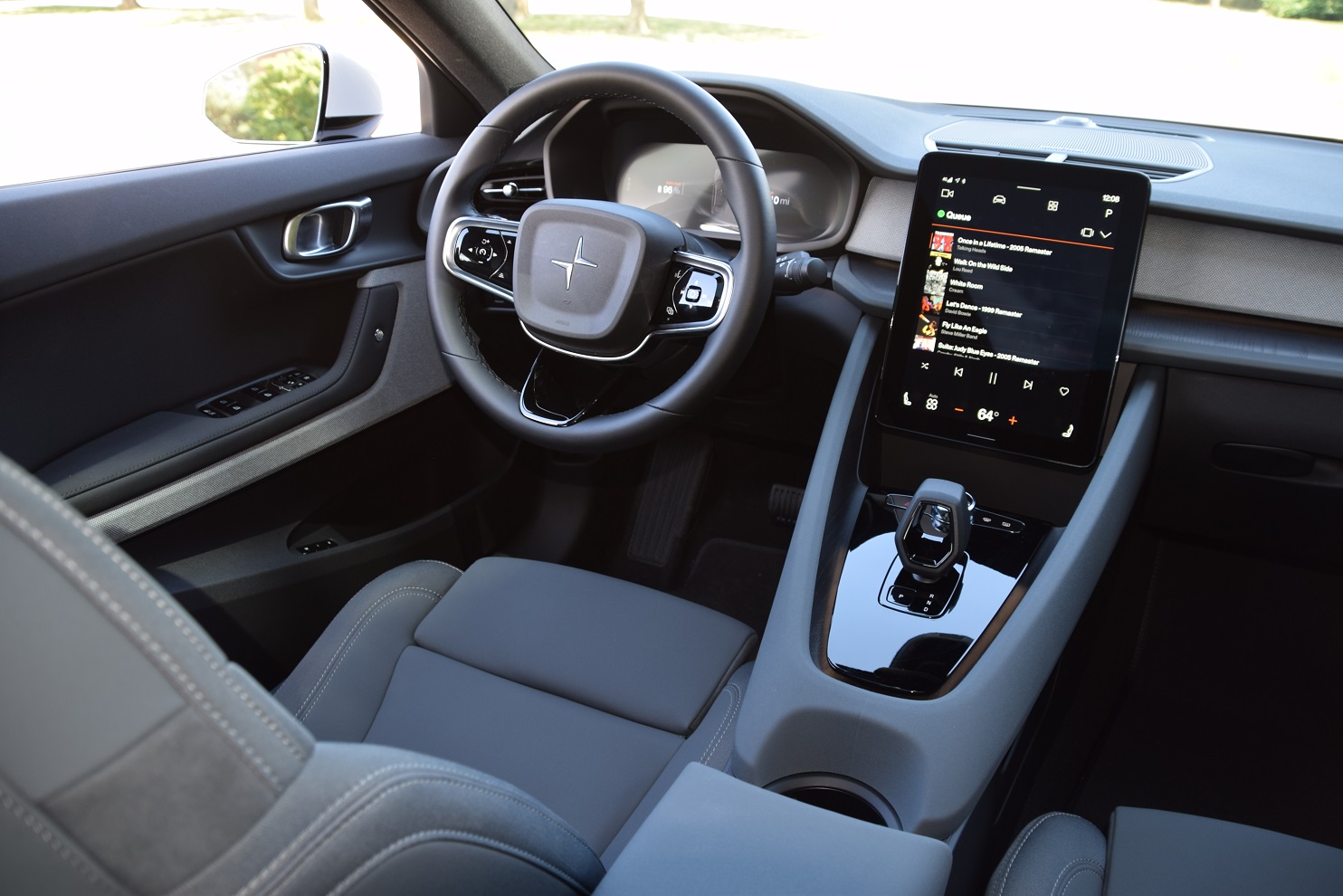 We could go on about all that we love in the Polestar 2, including the bright gold seatbelts that provide the lone splash of color in a monochromatic, vegan-friendly interior bathed in battleship gray.

But it’s the starting price that seals the deal, raises eyebrows and has us wondering if the Swedes have dialed in the magic formula for BEV success: $59,900 in the U.S. ($69,900 in Canada). That would have made it eligible for Wards 10 Best Engines & Propulsion Systems testing even before we dashed away the price cap earlier this year.

Based on the specs, drivetrain, battery range and feature content, we were expecting a higher price.

We’ve driven a lot of Volvos, but the Polestar 2 is the first that checks all the boxes so completely.

Funny thing is, it technically is not a Volvo. Polestar was created in October 2017 as a 50-50 joint venture between Volvo Car Group and China’s Zhejiang Geely Holding, which owns Volvo Car.

The Polestar marketing team is hoping people will refer to this new fastback BEV as simply Polestar 2 and not Volvo Polestar 2. We’ll see about that because enthusiasts may know the Polestar brand for its association with motorsports and Volvo’s performance accessory parts.

But that’s all changed now that Polestar is a dedicated BEV brand that started making the Polestar 1 plug-in hybrid a year ago at a plant in Chendgdu, China, and now the Polestar 2 (pictured below) is in production in Luqiao, China, based on Volvo’s Compact Modular Architecture.

Still to come is the Polestar 3 (not certain when), a low-roof 5-seat SUV that will be an all-electric offspring from Volvo’s second-generation SPA platform. 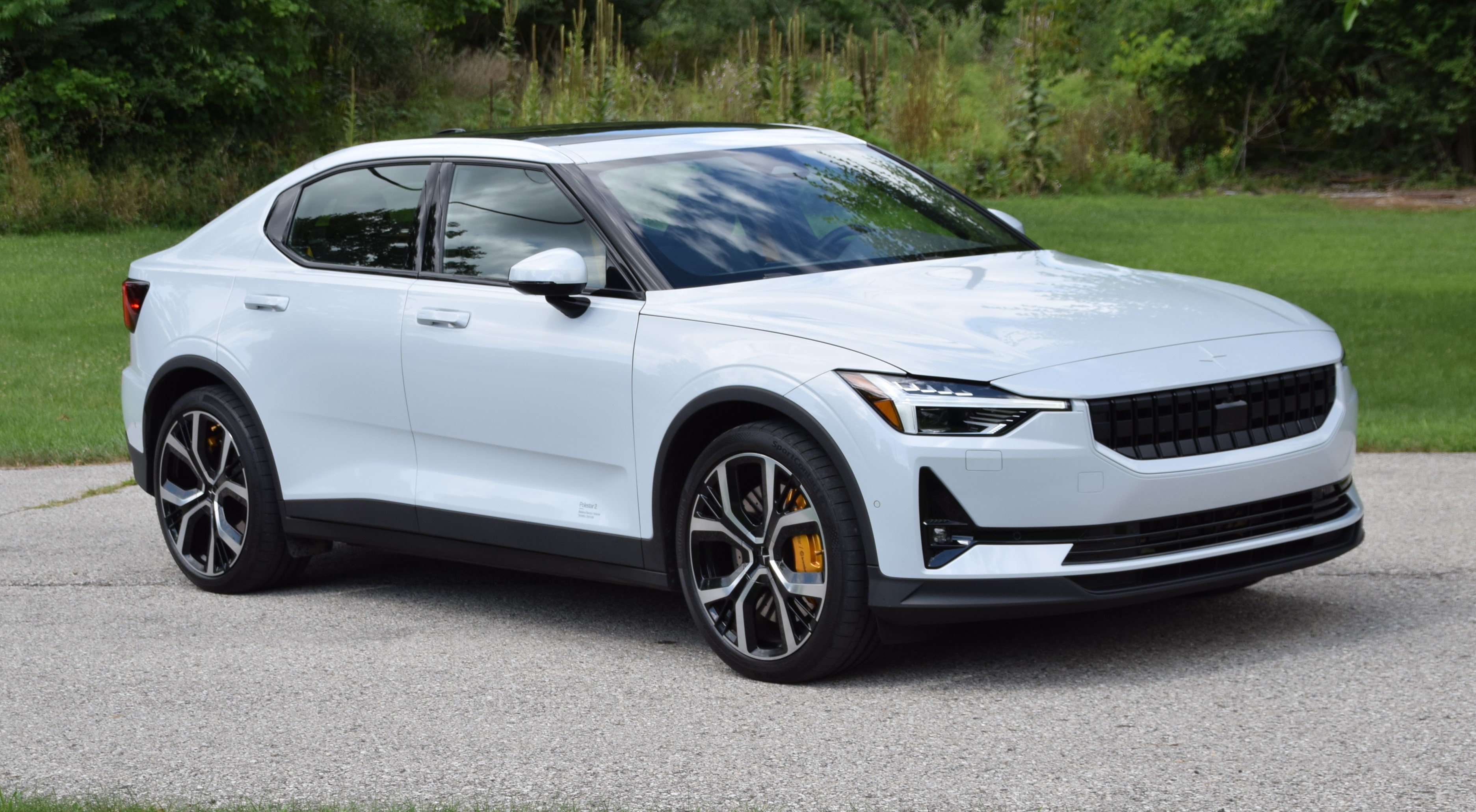 While the product plan calls for 1,500 Polestar 1 hybrids during a three-year production run that ends in 2022, the expectations are much higher for the Polestar 2, with global volume in the tens of thousands.

The Polestar 2 weighs in at 4,680 lbs. (2,123 kg), which makes it lighter than the Tesla Model S but heavier than Tesla’s Model 3 – not a bad strategy to target the white space in between. Plus, the Polestar 2 is taller than both Teslas while overall length actually is shorter, which makes for unique proportions that are SUV-ish, well suited for today’s market.

How far all this juice will get you remains unclear. Our test car, indicating 100% fully charged, displayed range of 210 miles (338 km), while the WLTP global test cycle pegs overall range at 291 miles (468 km). In the U.S., the EPA test results should be announced very soon.

At a test track in Fowlerville, MI, the Polestar team recently assembled the Audi e-tron, Jaguar I-Pace and Tesla Model 3 to run against the Polestar 2. All four, fully charged, ran 70 mph (113 km/h) at the closed circuit to see which could run the farthest. The Model 3 was victorious, logging 234 miles (377 km), while the Polestar 2 came in second with 205 miles (330 km).

During our 30-mile (48-km) test drive here, mostly in stop-and-go city traffic, the Polestar 2 burned exactly that – 30 miles – according to the trip computer.

Inside, fit-and-finish are excellent in our test model, and the overall aesthetic emphasizes a clean, uncluttered look. With the second row folded, there’s loads of room under the sportback hatch. 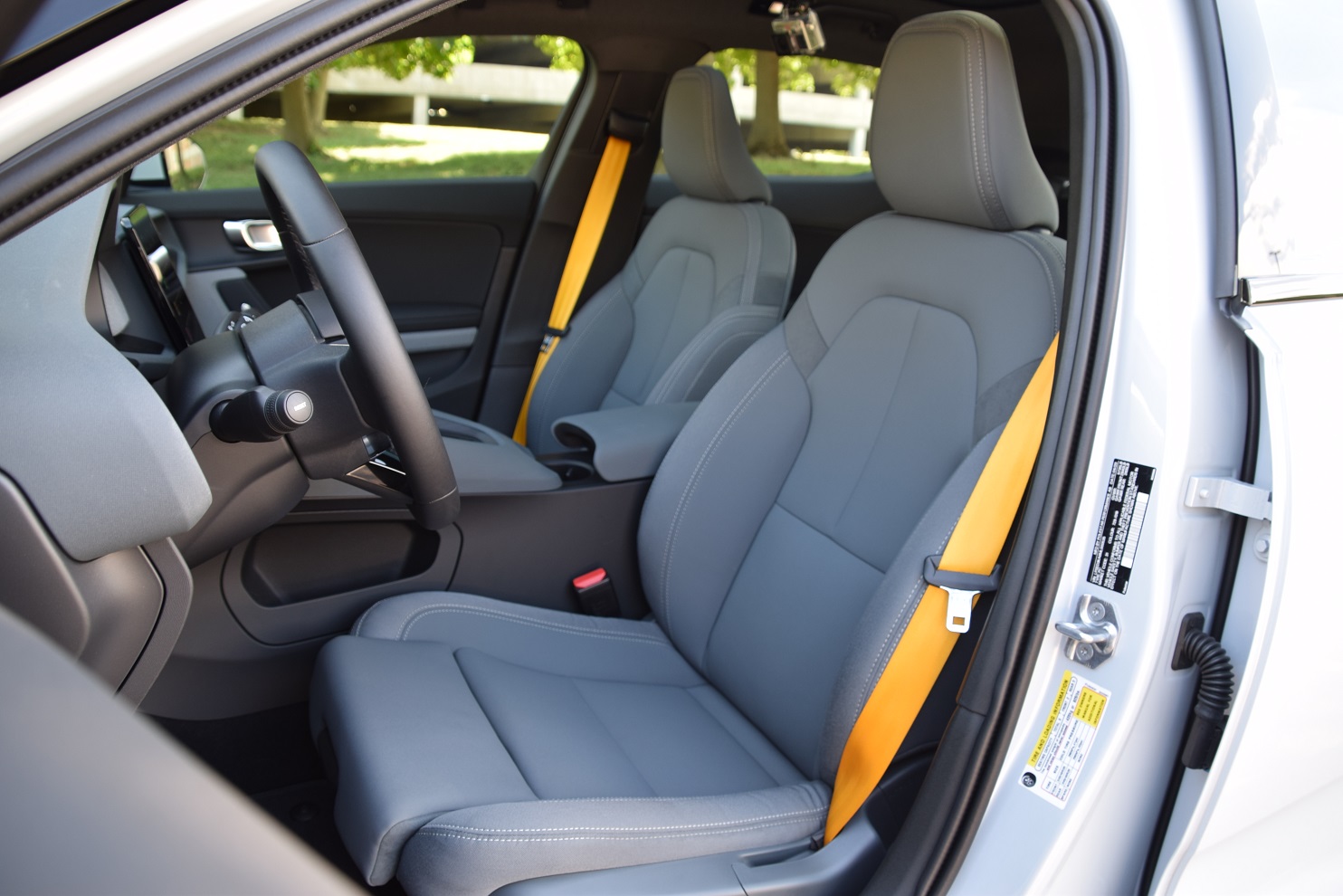 Gold seatbelts are optional in Polestar 2.

Most of the vehicle functions are baked into the tablet-shaped Android-operated touchscreen, which leaves only four physical buttons in the center console for emergency flashers, windshield defroster, switching to park and an audio volume knob. Other controls are on the steering wheel, and the overall layout will be familiar and appreciated by Volvo loyalists.

Navigating this touchscreen is easier than those in Volvos of the past, and voice controls respond well to natural speech. Google’s also ready to tell a joke whenever you want.

Interior materials are responsibly sourced: Plastic bottles are ground up to make the carpet, and other recycled materials are spun into the WeaveTech interior textiles, which Polestar bills as durable and easy to clean.

Leather (made with a chrome-free process) is available, as well as two fabric interiors. The standard interior is vegan-friendly, featuring no animal-derived products of any sort in materials or construction. Recycled black ash wood is used as interior trim inlays.

Pricing is in line with other internal-combustion Volvos already on the market, and yet the Polestar 2 feels superior in many ways – particularly the emissions-free driving. 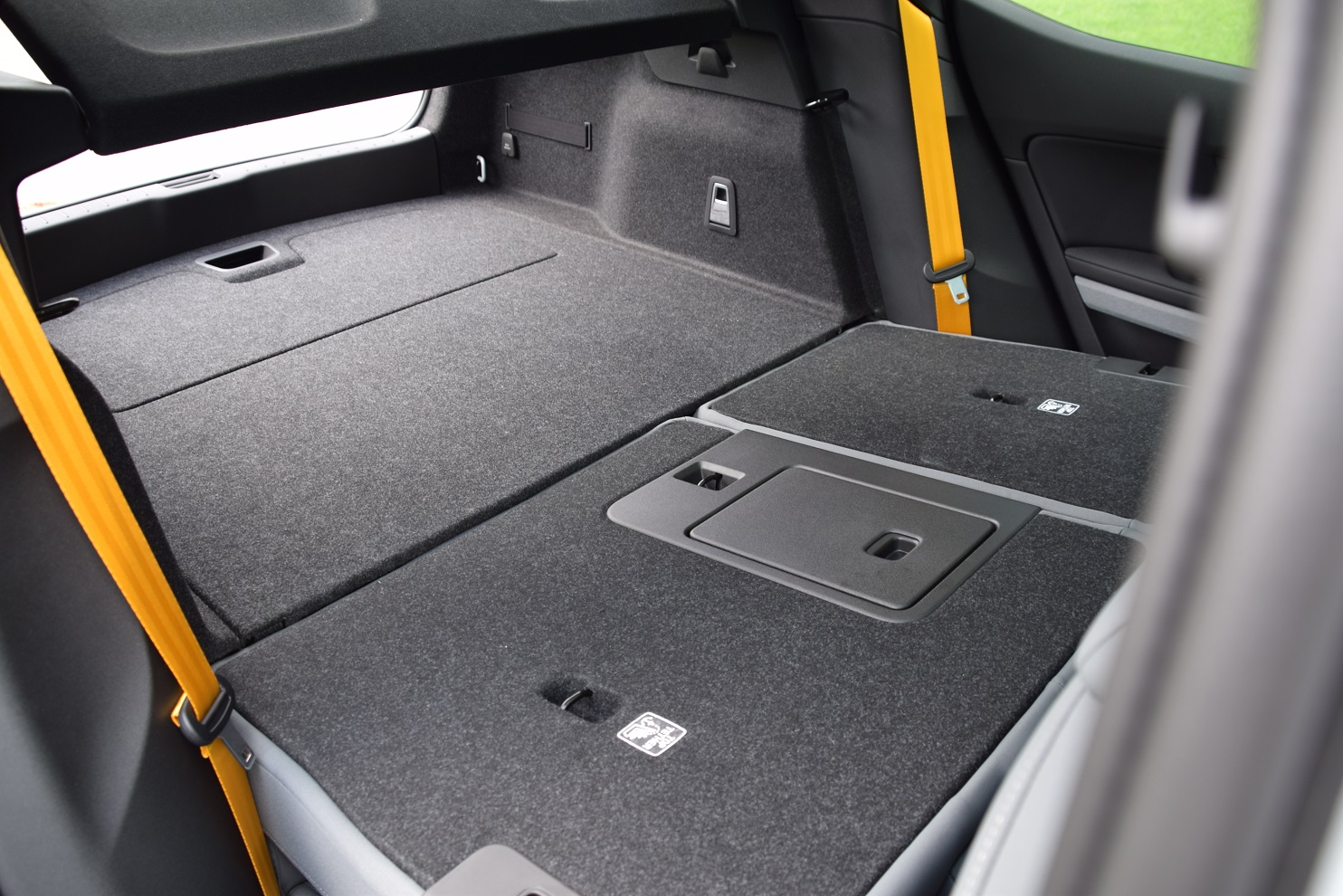 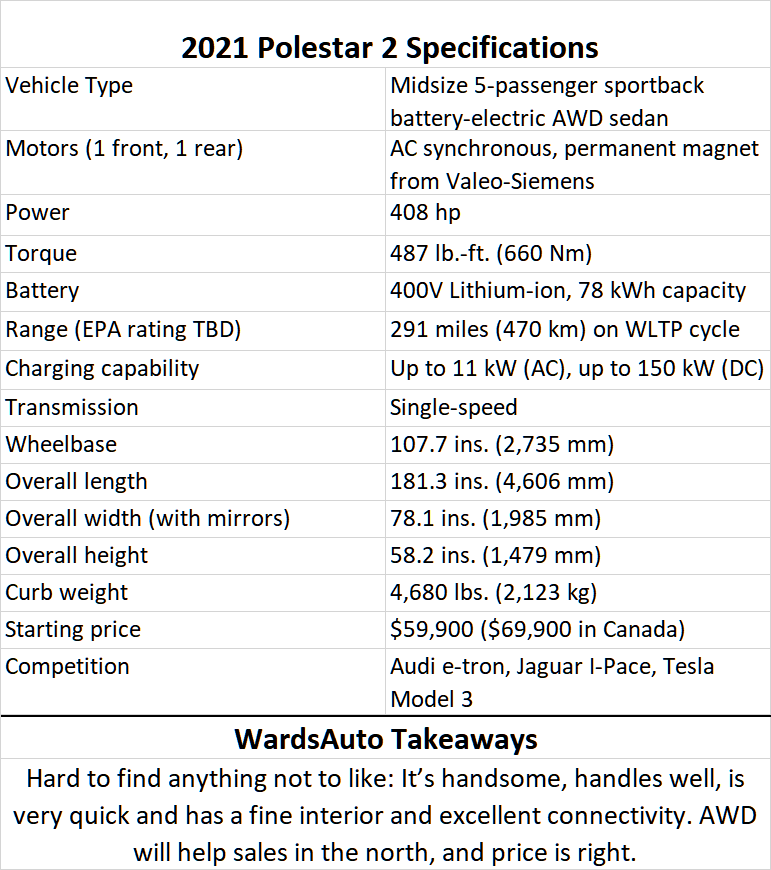